The second of the OECD’s “transversal conclusions” resonates so strongly with our approaches to education at ICHK that I would like to continue to explore it here in this second part of this piece.

In the first part, I examined to ways in which our 5+1 model directly impacts on our capacity to foster meaningful collaboration and cooperation between students. I reflected on the importance for ICHK of the ‘learning zone’, and how a proper appreciation of what the learning zone entails requires sensitivity to cognitive load and to both mental and physical stamina.

I also touched briefly on our commitment to establishing adult-to-adult relationships with students – encouraging them to adopt a mindful and realistic approach to the demands they place on themselves and to their transactions with others, whether their fellow students or teaching and support staff.

My assertion was that these dimensions of 5+1 help give rise to a culture of mutuality and support at ICHK, which make group, team and pair work meaningful in the school environment.

There is, in addition to this, a second way in which we promote the value of collaborative work – and that is through the design and delivery of our curriculum.

I would like to explore here the ways in which our unique Human Technologies course, which we have written ourselves, adds to the positive culture of ICHK. This is, in part, by equipping our students directly and explicitly with personal and social tools for living. These are the tools they need to draw on to be valuable and valued team players, both as leaders and followers.

What is a Technology?

Human Technologies (HT) is based in a series of interconnected assumptions. Put most simply, the HT perspective condenses down to this understanding:

A individual’s operational or lived “intelligence” lies not so much in their raw “brain power” or “IQ”, but rather in the decisions and choices they make when connecting with, being influenced by and acting on the thinking of others, both living and dead, past and present.

To explore this claim, we need first to define what we mean by “technology” within the HT context.

This requires stepping beyond the narrow designation that has come to be ascribed to technology in the late 20th and early 21st centuries i.e. technology as tools, as the physical stuff with which we do physical things.

While we recognise this dimension of technology as part of the story, we work from a broader interpretation. Referring to the OED definition, we understand technology as “the application of scientific knowledge for practical purposes, expressly in industry; machinery and devices developed from scientific knowledge; the branch of knowledge dealing with engineering or applied sciences”.

This, in turn, leads us to take a step further back, to get to grips with the term ‘science’. Science, the OED tells us, is “a systematically organised body of knowledge on a particular subject”.

We have created a technology for understanding HT: a four-leaved Venn diagram. We opted for the Venn diagram because of its properties as a technology for perceiving more clearly the contrasts and comparisons, identities and differences, between apparently diverse categories.

The four categories in HT are cognitive, material, social and spiritual. 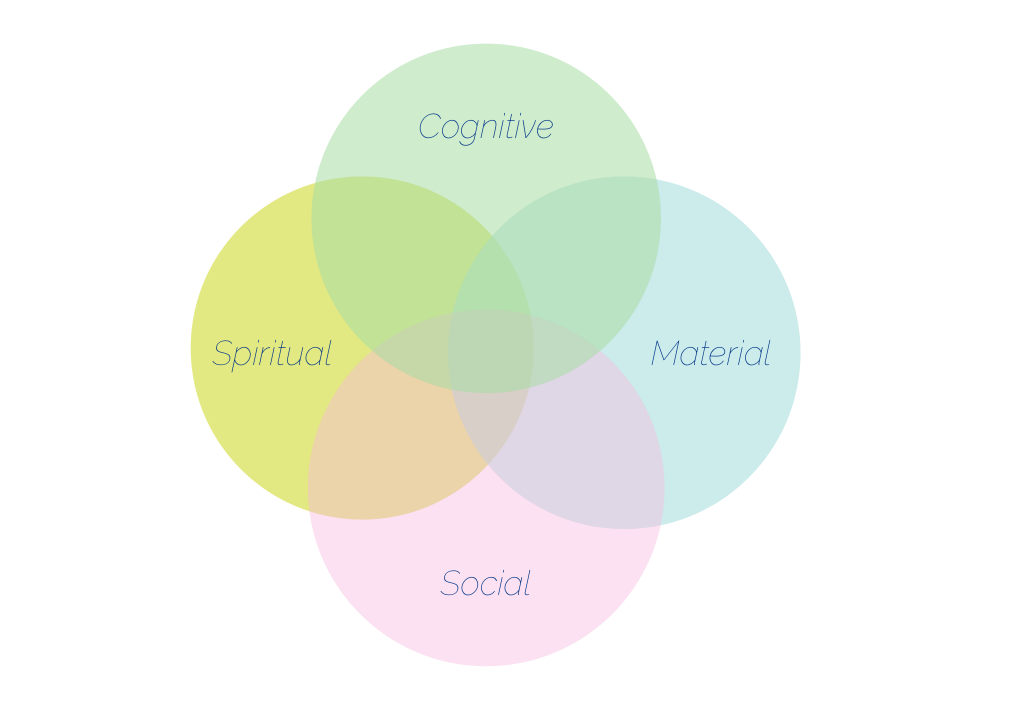 But, of course, as you will already have noticed, few of these technologies belong in just one category. This is a reflection the Venn diagrammatic nature of the world. Rather they tend to straddle two or three, to occupy a space that points to the complexity of being human, and to remind us how seldom we operate to one purpose alone.

Indeed part of the fun of HT is playing the game of placing any particular human practice within our matrix. How about a graph? A badge? A prayer? A tune? A story? A holiday abroad? A presidential debate!?

How HT Supports Group and Teamwork

With all this in mind, and returning to the theme of the OECD’s recommendations, in what ways does HT promote collaboration and cooperation amongst students at ICHK?

Firstly, by bringing to their attention the mere fact that there are technologies to support both these practices and that these technologies can be made visible. They might include framing constructive feedback and receiving it mindfully; making enthusiasm obvious and using the language of encouragement and support to buoy up colleagues; recognising roles in group projects and knowing how to fulfill them; taking turns in conversation and listening actively; adopting humour as a defuser of tension and as a builder of camaraderie.

And, secondly, having once identified these technologies, by teaching them explicitly in ways that are practical and memorable. In this way, they cease to be a desirable but intangible quality, and become, instead, part of the students’ routine toolbox for life.

Human Technologies breaks down some of the “mysteries” of human success and effectiveness in the world. It promises our students that techniques for clear thinking, for the attractive and forceful expression of ideas, for better relations with others, and for feelings of contentment and acceptance of self, are things that can be learned and rehearsed. And they are, therefore, with practice, things at which they can get better and better.

Finally, and most significantly because most universally, Human Technologies teaches that all technologies are caught in the evolutionary tide of change in the world. As such, even one’s favourite technologies need to be assessed and reassessed constantly, so as to make sure that they are still doing the job for which they were intended, that the job, in fact, still needs to be done, and that, if it does, no alternative technology does it better.

It is in this spirit of clear-sighted critical enquiry that Human Technologies finds its transformative power for students. Once understood and drawn on, the Human Technologies perspective at ICHK provides a template for intelligent engagement, right across the curriculum, making our students smarter, happier, more confident and more thoughtful people.