What is ‘The Box’​ we’re supposed to be thinking outside of?

Home / Teacher Insights / What is ‘The Box’​ we’re supposed to be thinking outside of? 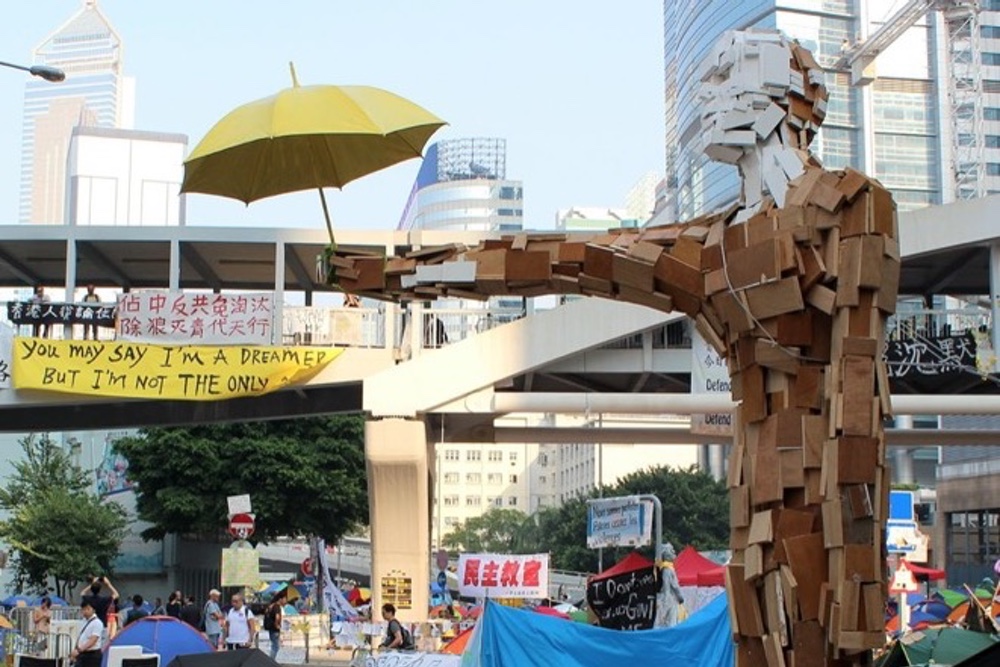 I used to have a poster on my classroom wall exhorting my students to “Think Outside the Box!”

I’ve taken it down and I’m not putting it back up.

When we ask people to ‘Think outside the box”, we’re asking for an idea that is unusual, different…divergent…sideways; a brand-new idea which will impress us with its novelty and value. We’re asking for the non-obvious, the esoteric, perhaps even the bizarre and ridiculous, and we think that issuing a demand (or perhaps, more charitably, granting a permission), will somehow make that happen.

More often than not it won’t.

Responding to well-intentioned requests to ‘Think outside the box’ is really difficult because most people don’t understand what the box is, much less, how to think outside it.

The hackneyed phrase is often attributed to John Adair, a consultant who popularised the use of the ‘nine-dots’ puzzle in the seventies and eighties. The puzzle and phrase became a part of Walt Disney’s in-house training.

Just in case you haven’t come across this old chestnut, the nine-dots puzzle challenges players to join all nine dots with four straight, continuous lines, without lifting the pencil from the paper. 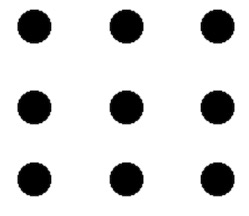 The difficulty in the puzzle is the player’s tendency to imagine a boundary around the nine-dot array – a limitation that doesn’t exist and is entirely self-imposed. We tend to see a box where there isn’t one.

Here’s one of the possible solutions. 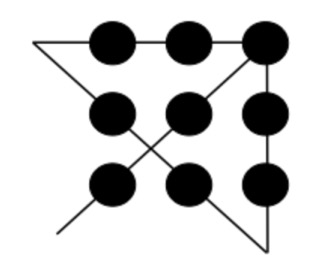 If you’re a super-sideways thinker you’ll be able to figure out at least two ways to join all nine dots with one continuous straight line.

Acknowledging that we impose limitations on our own thinking is a useful exercise, but the singularity implied by ‘The box’ is an unhelpful oversimplification of the complex and fragile ecosystems of creative thought and creative action. One of the better ways of becoming more creative is committing to explicitly teaching our students and employees about the complex nature of creative thought itself. We need to demystify the box!

Not splitting semantic hairs here, but it is far more useful to think about….The boxes, plural. The notion of escaping a box, singular, implies the existence of a singular boundary that needs to be passed through.

Here’s the kicker. There are hundreds, if not thousands of boxes.

Here are just a few of them:

… and this is just the very tip of the ‘boxberg’.

The last time I looked, I found forty-eight boxes that influence student creativity. There are very likely many more.

So what we have here is a ‘shifting-sands’ scenario. Together, the boxes are a vast, complex, individualised, multi-faceted, agglomeration. The boxes are who and what we are. They are the human condition. Just go ahead and think outside of all of that…or some of that…or the parts of it that hold you back..Which parts are those? And how do you know, unless you know what all the boxes are? And how can you know how to get outside? What are your strategies for extending the boxes, or punching through particular walls? Once again there is no singular solution. To ask anyone to punch their way through all of their boxes and deliver creative thought that runs counter to it, is simply too big an ask.

A few years ago I was chatting to John Denton, Director at Lead8, who bemoaned what he called the problem of ‘Blank paper thinking’ in Hong Kong. He said that in architecture and interior design if you give Hong Kong employees a technical problem, they will knock it out of the park every single time, but if you ask a group for new ideas, you’ll come back an hour later and there will still be a blank piece of paper. This absolutely does not mean that Hong Kongers are uncreative. That would be a dangerous generalisation. What it does mean is that the conditions for co-creativity were not especially conducive. There were problems with the size and strength of the boxes, and with the will, or ability to see a way through them. 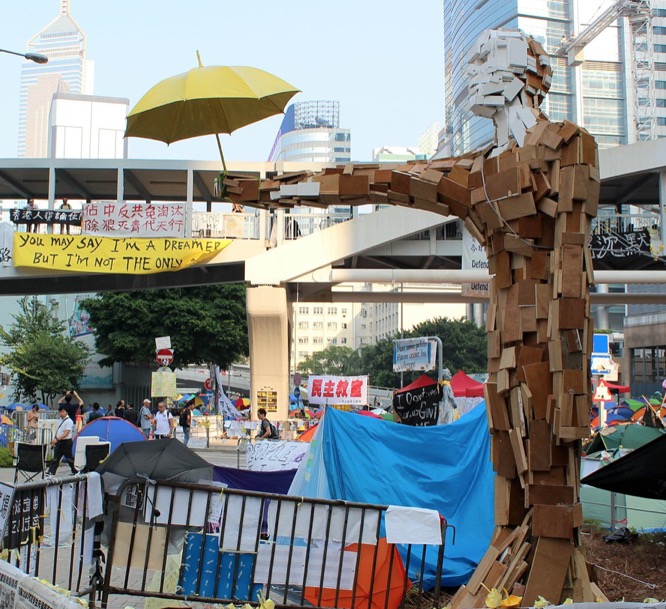 The Umbrella Revolution of 2014 saw large sections of Hong Kong sectioned off by pro-democracy protesters. Sites in Mong Kok and Causeway Bay became what the ‘ontological anarchist’ Hakim Bey called ‘Temporary Autonomous Zones’ – spaces that, for a limited time, eluded formal structures of control. Within these TAZs, the outpouring of Hong Kong creativity was immense. There were biting satirical posters and artefacts, sculptures, poetry, prose..It was like someone had unleashed the pent-up creativity and detonated it on the street. What had changed from the ‘Blank paper’ to the ‘Yellow umbrella’ were the sizes of some of the boxes. The conditions within the barricades made it safer to take a risk, the cause was a powerful source of unity and motivation, intentions of fellow protestors were trusted, there was no form of assessment of the products created.., collaborators chose each other..and so on.

So…how do we think outside the boxes?

This brings me back to the nine-dots problem where we ‘see’ a box where there isn’t one. If we learn to ‘see’ (By which I mean acknowledge or learn about) our many boxes, perhaps we can then consider what steps must be taken to move beyond them. Rather than offer a trite aphorism in the hope that it shakes an idea loose, what we should be doing, as thought-leaders in our organisations, is raising ‘creativity consciousness’ by training people to think about creativity in relation to themselves. We need to teach our employees what the boxes are, before we can do anything about them.

The boxes are all made of thought. Only by thinking about them can we know what to do, in order to do things differently.

Very few people work in this area, and if you are interested in teaching/training to raise ‘creativity consciousness’ you can do no better than start by Jim Clarke’s process that uses an actual box..to unpack a box.

You’ll never look at the world of creativity in the same way again.

All images courtesy of https://commons.wikimedia.org