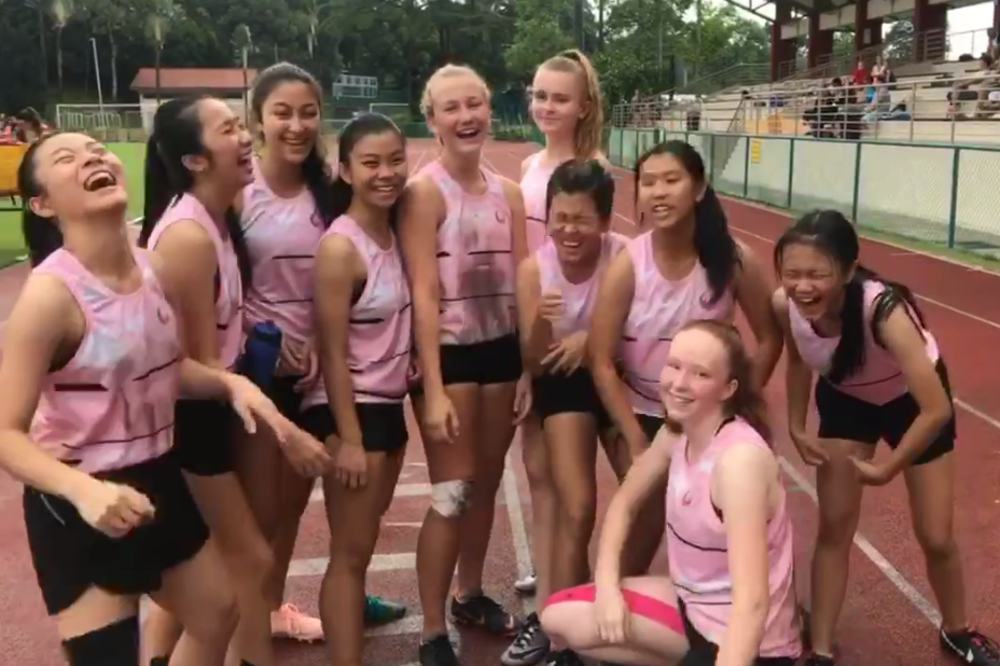 Touch Rugby is a very important part of our school, so this year we made an all girls rugby team to compete in Singapore. Many people joined so we had enough people to make two teams, one U14 team and one U16 team. Both teams knew that we would be up against tough and competitive opponents. We had prepared for weeks (including after school training and Saturday practices) to be ready to face new teams and new challenges.

Every Tuesday after school we would practice for one hour from 3:30 to 4:30, with Ben being one of our coaches and Mila our hired coach who plays for the Hong Kong rugby team. On Saturdays, it would be more chilled but we would use the skills we had learnt on Tuesdays and apply it to our games, practising from 10:00 to 12:00. Although Mila wanted us to do our best, she would teach us skills slowly so that we could understand how to do it and integrate it into our game. Mila was also not only a coach but she also made time to talk to everyone and soon became part of our team. Ben would always be supportive and give us advice on how to better as well as encouraging us. We learnt skills such as “Candy” and “swinging” that vastly improved our game.

When the time finally came to leave Hong Kong everyone was ready to “break it down”. We met up at the airport very early, to everyone’s displeasure and checked in. We had sometime before our flight was boarding so Mr Kay, Ben and Mila let us have some time to eat. We all met up at the gate and went on the plane as a team. Although we were all sleep deprived, everyone was excited for what was to come. To help our sleep deprivation, we got ice cream!

After a long four hours on the plane, everyone was ready to get off and check in the hotel. We made a few circles while attempting to find our bus but we managed to find it in the end. We arrived at our hotel at around 2:00pm and everyone immediately went to their rooms to rest up. After four hours of rest, we met up again at the lobby to go to Sentosa. We took the MRT and the Sentosa express to go to the Sentosa Luge, we arrived there at 6:00pm and we had until 10:00pm. We were all excited until we saw the helmets, they were all gross and sweaty, it seemed as if someone had taken a sweat bath in them. We all split up as we lined up, there were a lot of people waiting there so we had to wait a long time. People were all crowded together and tensions were high, there was a small fight that broke out between a worker and a man, but we all thankfully escaped the situation. Most people seemed to be quite disappointed in the luge as everyone only went on it once. We were supposed to stay until 10:00pm but everyone agreed that it was too late as we would then arrive at the hotel at around 11:00 pm so we asked Ben and Mr Kay if we could leave earlier. We all ended up leaving at 9:30pm. We all arrived at the hotel ready to sleep and ready for the matches that were to come.

It was an early start to our Saturday, it was game day! But when we went out for breakfast, it was pouring with rain. Our first day of competition was going to be a rainy one. Straight after breakfast, we hoped on the bus to take us to SAS. Singapore American School was a large and intimidating building, there were six big fields and a big cafeteria, and there was a buzz of excitement and worry in the air. We arrived at SAS with plenty of time to spare, we slowly warmed up and got ready for our first match. We were up against a tough school called the East Dragons. It was our first time playing together in a real game so everyone was nervous. We had been told that they were a good team, and despite that fact, we went out there as team and tried our best. Maybe it was the rain, maybe it was the fact that they were a good team or maybe it was because it was our first match together as a team but we lost our first game. But we had three more games to go so we were still hopeful, even though we had lost, we had gained something more – we gained experience and became more confident as a team.

Our next game was a while away so we went to support our U16 girls. We cheered them on for a while and then we went to warm up again and got ready for our next match. We now all knew how good the teams in Singapore truly were but we were not afraid. We went on the field as a team because we knew that we were truly a team now. Although we also lost this game too, we all knew that we had played much better, with more strategy and more confidence. We had also scored a try which boosted our confidence even more. Our next match was against Marlborough, and we did not know how difficult this match would be.

We had prepared for hard teams in Singapore but no one had prepared us for this kind of touch rugby. Marlborough was a very good team that had a strong attack and defence but they played hard, not necessarily dirty play but they played aggressively. We all struggled to rein in our tempers but that did not drive our team apart, instead it made us a stronger team. We lost that game sorely but with tempers still high we directed all our anger towards the last team we were to play against. We marched onto the field determined to win, every single person had that determination in their eye. We played very well against the last team and won 23-0. Both of our teams went back to the hotel exhausted but happy with how the day turned out.

After our long hard day, you would think that we would go to the hotel and rest but no, we convinced Ben and Mr Kay to go shopping! So we spent two hours at the shopping mall. Only after we had  gone shopping did we finally go back to our hotel to rest.

On Sunday morning everyone was still tired after the long day we had yesterday but everyone was also excited. Luckily for us, it was not raining again but cloudy. The U16s still had a pool game while the U14s only had friendly matches to play. We thought we would arrive at the school late as we had set off a bit late so we sent the U16s first because they had their match very soon. The U14s were left to help carry the rest of the suitcases and the bags as we had already checked out of our hotel. The U14s lugged the bags all the way to the cafeteria only to find out that we didn’t really need to bring them off the bus and that the U16s game had been postponed as the storm sirens went off signalling that there was a possibility that there could be lightning bolts. Our first match was a while away so we went to watch the U16s play. Our first match was against Tanglin and they were really good. We played well but we did not sub as much as we probably should have and the match passed really quickly. Our next match was against U20s, we were a bit nervous because we assumed that they would be good because they were older than us but in the end we won the game and our last game in Singapore. We were all really proud of ourselves and so were Ben, Mila and Mr. Kay. With a cheerful mood we got on the bus and headed to the airport.

At the airport we stayed for seven hours! But we weren’t bored at all, we did plenty of things during those hours, but firstly and most importantly, we ate. We were all starving after our long morning. When we got on the plane it was a bittersweet moment because we were saying bye to Singapore and were going back to Hong Kong. We arrived very late in Hong Kong so the next day, some people didn’t come to school because they were too tired.

Overall everyone had a fun time, both teams learnt a lot from this experience and became more confident in playing touch rugby. We all grew as a team and it is an experience that we won’t forget for a long time to come.