Re-framing grief and growing through loss 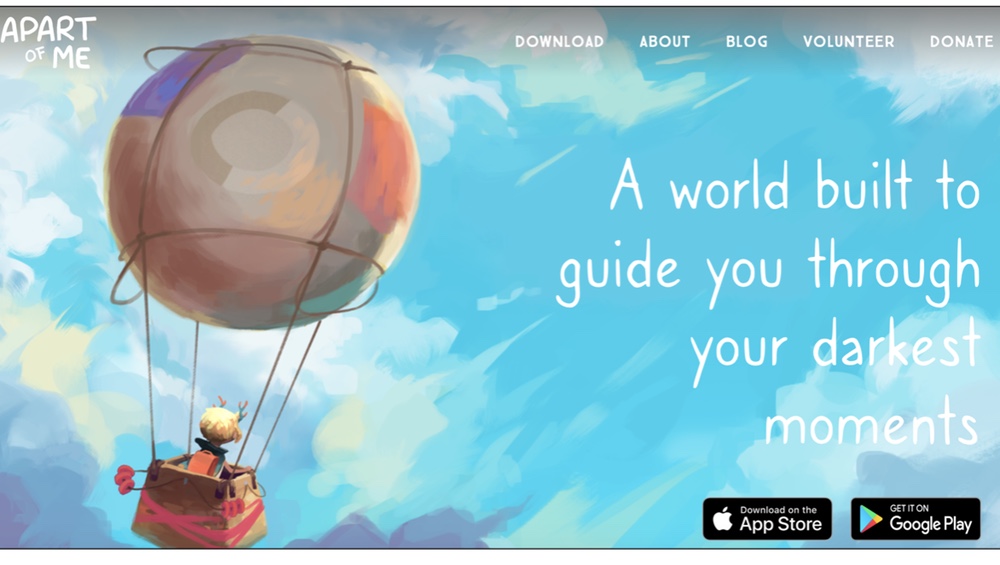 School counsellor Christy Tsui and I recently had the opportunity to work with the London-based, co-creative collective weglimpse.co. a voluntary group of media and marketing professionals who donate their expertise to charities and NGOs.

The aim of the online working group was to generate ideas for a campaign for ‘Apart of Me’ (https://apartofme.app) Designed by child psychotherapist Louis Weinstein, ‘Apart of Me’ is an award-winning game which helps isolated children navigate their way through the turbulent waters of bereavement.

Our work with these organisations helped cast a different light on what grief is, how it manifests, and why it must be reframed and honoured, especially now.

A Quick Story about Death

The Emperor commissions a calligrapher to create a work of great beauty. The calligrapher thinks deeply, draws three lines and unveils, in his very best handwriting:

The Emperor is outraged! He’d commissioned a work of art not a morbid recipe for depression Why would anyone want to hang this on the palace wall? He demands to know what the hapless calligrapher was thinking!

The calligrapher tells him that “Anything else would be unthinkable” and the court holds its collective breath. The Emperor understands the profundity of a work which speaks to the inevitable and natural order of death. He understands that is the way things should be. There is a natural order to it, and the consequences of disordering this sequence would be unbearably painful for those left behind.

What is most telling about this story is the Emperor’s ‘knee-jerk’ reaction to the subject of death, and his initial unwillingness to engage with the subject, unlike the calligrapher who had given his words thoughtful consideration.

Grief is our response to loss. Its most devastating forms are occasioned by the permanent loss of someone or something close to us. Grief is most closely bound up with an emotional response, but its effects are are also physical, behavioural, cognitive, social and philosophical.

Everyone on the planet is experiencing some level of grief this year, albeit at a lesser intensity than the grief of the bereaved. We have all experienced losses of plans, connections, opportunities, comforts and what we thought were certainties. It is quite likely that we are grieving for these smaller losses, albeit at a lesser intensity, perhaps at an intensity that is difficult to see.

Various models based on Kubler-Ross’ Five 5 stage Grief cycle. propose a series of ‘stages’ which grief-stricken people generally pass through. According to these ‘stage models’, the bereaved pass through denial, anger, bargaining, depression, and finally acceptance. Although these models are well-known, they are still just models and not the reality of an individual’s objective experience of grief. While there may indeed be a general series of broad describable stages, knowing what we know about the complexity of human beings, there can be no single, ‘cookie-cutter’ sequence of complex responses in complex contexts. One model does not fit all. The psychotherapists involved in creating ‘Apart of Me’ take a non-sequential view of grief, and focus not on the preordained ‘stages’ but rather on the ‘symptoms’ as they occur in a non-linear and recursive manner. 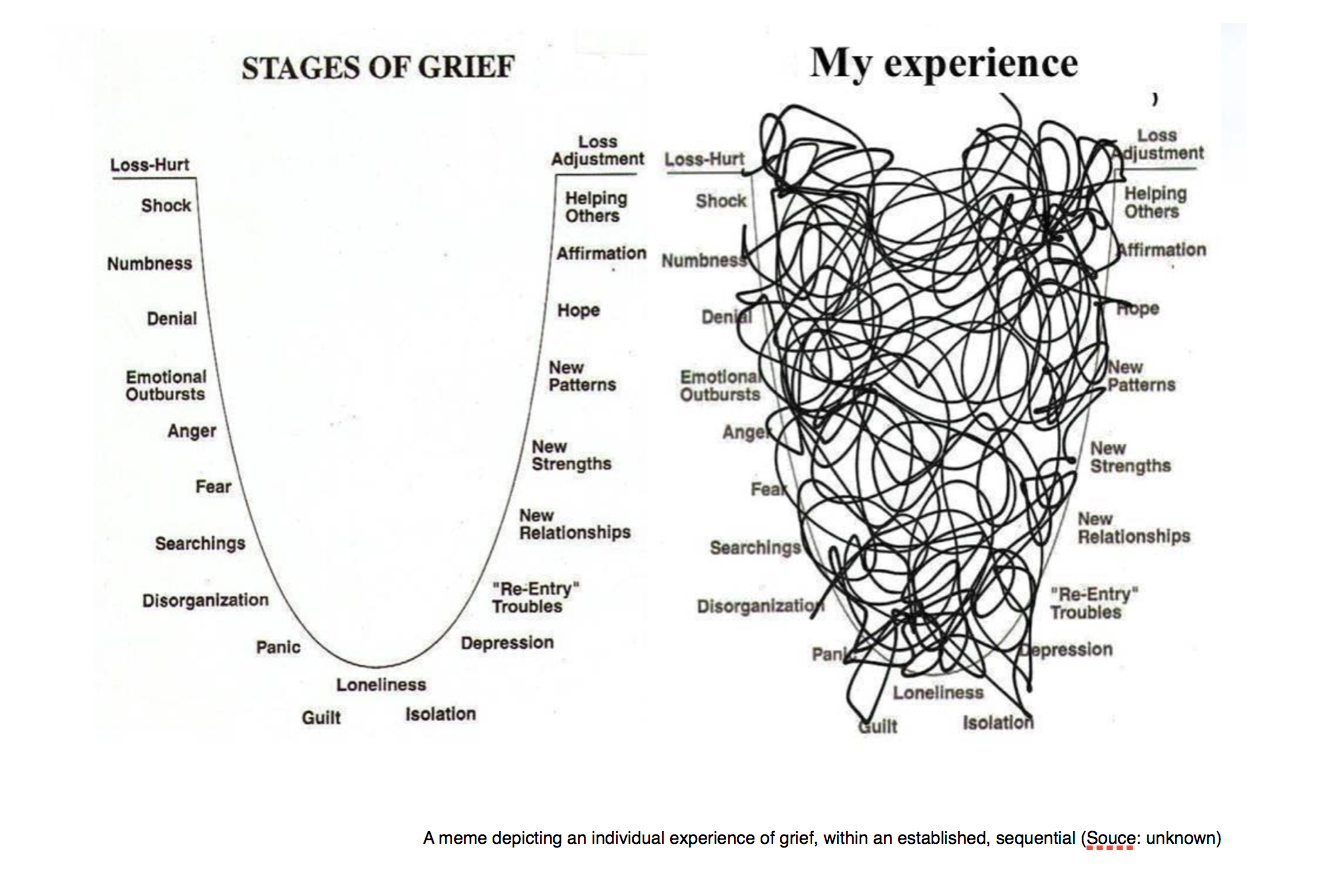 The Symptoms of Grief

When we first think about how grief presents itself, we very likely imagine sobs and tears as the most common manifestations, but the symptoms of grief extend far beyond their most obvious expressions, and it is here we need to become far more aware of our own emotional states and those of the people around us. Common mental, physical, spiritual and social reactions to grief include, low self esteem, difficulty making decisions, changes in sleeping patterns, tiredness and feelings of loss, or a renewed sense of purpose.

It is worth considering how easy it is to mistake some of the subtle ‘symptoms of grief’ for something else, or to simply not notice them at all. Perhaps the first step to becoming more adept at relating to the grief-stricken, is to become more familiar with the wide-ranging symptoms and their manifestations.

Understanding and Dealing with Grief

When faced with someone who has experienced a loss of any real significance, we are very often uncomfortable, unprepared and unskilled at dealing with the emotions and behaviours involved. We are aware of the potentially explosive emotional fragility of the bereaved. We typically feel the need to say something, but are not sure how to articulate ourselves in a beneficial and compassionate way. It is so difficult to know what so say, and so we reach for a safe cliche or a trite aphorism, in the belief that to say something is better than to say nothing at all. Unfortunately, cliches are cliches precisely because they are repeated endlessly and using them can come to seem shallow, disconnected and meaningless.

If as someone who has experienced loss, keeping grief at a distance, pushing it down, or away is to potentially store up psychological trouble for later. Psychotherapist Francis Weller tells us that grief is to be felt; that it is necessary for us to remain well. He writes that:

“Grief is subversive, undermining the quiet agreement to behave and be in control of our emotions. It is an act of protest that declares our refusal to live numb and small. There is something feral about grief, something essentially outside the ordained and sanctioned behaviors of our culture. Because of that, grief is necessary to the vitality of the soul. Contrary to our fears, grief is suffused with life-force…. It is not a state of deadness or emotional flatness. Grief is alive, wild, untamed and cannot be domesticated. It resists the demands to remain passive and still. We move in jangled, unsettled, and riotous ways when grief takes hold of us. It is truly an emotion that rises from the soul.”

The work of ‘Apart of Me’ seeks to reframe grief as an experience which, if honoured and supported well, leads to personal growth, wisdom and the development of greater compassion. In a year that has seen losses at all scales of severity on a global level, the concern of the mental health community is that there is another, far quieter, unseen pandemic of unaddressed grief. As a school community which is committed to sustaining a therapeutic environment, we would do well to feel, express, honour, and continue to grow through the grief caused by the losses of 2020. To reach out sincerely and deeply to those who mourn, for whatever reason.

To let grief be felt and shown.

A list of some of the symptoms of grief: