How a Growth Mindset Helped to conquer the sport of polo 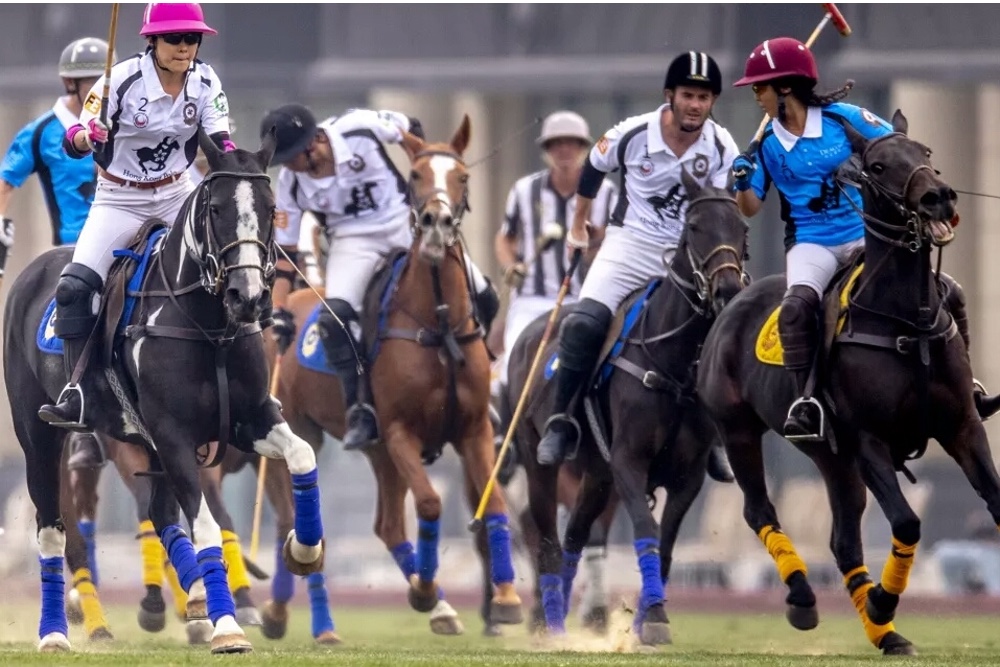 Jon Rees is a teacher of English, Human Technologies and Theory of Knowledge at ICHK

In the last 11 months, Jon Rees took up the challenge of learning to ride a horse so that he could participate in the first ever Hong Kong Polo Beginners Cup in Tianjin, China. That tournament took place last month, in October. In this article, Jon discusses how adopting a Growth Mindset- a key personal attribute which we promote to students at ICHK- helped him first identify the opportunity, and then pursue it to its conclusion.

Riding a horse has always appealed to the romantic side of my nature, and I would like to say it comes from reading too many novels from the 18th Century on my English literature degree course; however, it far more likely stems from watching too many cowboy movies where the heroes sleep under the stars as they attempt to restore justice to some dusty Western outpost where Evil just rode into town…there’s a showdown at High Noon, then they ride off into the sunset etc. etc.

I’d never seriously considered the thought of actually riding a horse, like putting your foot in the stirrups, swinging your inflexible leg over the saddle and praying to God that it would not bolt off into the Great Yonder ever before though…However, the seed of the idea was put to me by Andrew Leung, (our athletic director, Raymond Chan’s cousin, funnily enough), and I still didn’t think he was serious even after the second or third time he pitched the idea.

But Andrew, who is a barrister, is remarkably persuasive and also overwhelmingly passionate about polo. He rode himself twenty years ago and was just getting back into the sport once more. As I listened to him, his eyes shone as he described the thrill and intensity of competing on horseback with seven other riders on the pitch at the same time…

I also really liked how he pitched the idea of a Hong Kong Polo team being a little bit like the film Cool Runnings- a far-fetched but true story of a group of Jamaicans who harbour the desire to enter a bobsled team into the Winter Olympics (despite the sun-drenched surroundings of downtown Kingston). The parallels aren’t quite as stark, but the fact that there are no polo facilities whatsoever in Hong Kong (although now, Andrew has constructed a wooden practise horse in his back garden) meant that we would have to fly to Tianjin, China, about once every six weeks- a round trip of nearly 4,000 miles- to visit the Tianjin Goldin Metropolitan Polo Club- if we were to be ready to compete in the inaugural Hong Kong Beginners’ Cup.

And so we started our lunatic mission at the onset of winter, heading up to Tianjin for the first time at the end of November, 2017. There was frost on the ground and steam billowed from both our mouths and that of our horses. It was strange to think that, as I sat atop Selena, with only the sounds of the soft jingling of the horses’ harnesses, the clopping of hooves, and the tinny but uplifting Argentine rock music coming from head trainer Ferchu Erreguena’s small radio, that only twelve hours again I had left the chaotic, traffic-congested streets of Mong Kok.

That connection with nature was so relaxing that my very first memories of learning how to walk, and then trot, on horseback are some of my best from the whole 11 month experience.   I realised that to sit on a creature of such size, and with such potentially intimidating strength and speed, was not just manageable but enjoyable and tranquil. Learning to canter was a little more taxing, I can tell you, but then, because of the smoother rhythmic cadence of a horse’s motion as it cruises at its jogging pace, the canter is, I think, smoother and more enjoyable than the trot.

For equestrian-minded folk, the Goldin Metropolitan Polo Club in Tianjin is also quite the spectacular and unique place to visit. They have over 150 horses that are bred and trained specifically for polo, and these are flown in from some of the premier ranches in the world from Argentina to Australia. The setting of the club is also slightly surreal as the club is owned by a Hong Kong billionaire called Mr. Pan, (who strikes me as a modern day Jay Gatsby with more money than God), who has surrounded the polo arena with an enormous complex of mansion houses and luxury apartments, but as development has stalled, these mansion houses lie in a skeletal state of construction and made for a very surreal science-fiction-esque backdrop to our riding lessons.

Learning polo was a chance to challenge myself in a new sport that I never imagined I’d have the chance to play. I know that I would never have even thought about getting into this sport and seeing it through if it wasn’t for both the relentless enthusiasm and motivation of Andrew Leung but also due to the commitment at ICHK to promoting a growth mindset amongst our students often through the examples that we can set as teachers. Additionally, I’m now 37 years-old and notice my body slowing down, so I was interested in exploring avenues that would keep me competing in physically demanding sports at an older age. Polo seems to be the ultimate sport as it’s an invasion game like football or hockey, but of course, everything is played on horseback, eventually at faster and faster speeds, so it is thoroughly exhilarating.

The commitment needed to participate was demanding and I must admit that I nearly gave up on occasion. But I am so glad that I saw the journey out for a multitude of reasons. I got to meet people from all various walks of life here in Hong Kong. I remember one evening eating at a Mongolian barbeque in the city and being surrounded by a friendly, down-to-earth group; they were all successful, interesting people in their own right, and they had all come from a position of not knowing even how to ride a horse to committing themselves to the challenge, even as the short time frame meant that the learning curve felt very steep for all of us. But for Julian, it meant a chance for him to finally ride alongside his daughters. Michael would take the summer spending more time with his family as they all took riding lessons in the UK. For Gary Sze, whose son Evan goes to our school, it was a chance to push himself into something new, and not only did his team end up winning, with Gary scoring a number of times, but Evan then took his first riding lessons and was cantering by the end of the morning– great job, Evan!

I am sure I will ride again, but I need to lick some financial wounds. Learning to ride polo horses is financially viable but it is a commitment, particularly if you haven’t ridden before. However, the quality of one-to-one instruction at Goldin Metropolitan Polo Club is fantastic- the fact I went from zero to being ready for the competition in just 11 months is testament to the quality of instruction that I received from the Argentine instructors in Tianjin and also at the King Power Polo Club in Bangkok, (owned by the Thai businessman Vichai Srivaddhanaprabha who tragically died last week in a helicopter accident at Leicester City’s ground). I would highly recommend both clubs, especially to competent riders who are looking to get straight into stick-and-balling.

I’m proud of my achievements, although I still wish I had committed to more lessons in a sequence to have been able to play a more active role in the team come tournament time. But I made it, and in fact, even scored…once…a backhander from one-yard out as I sat resolutely on the goal-line…but they all count, and we ended going on to win our second game!

In the future, I also think that the polo riding experience could unlock other doors which is why it is worth saying “yes” to opportunities as they come along in life. The idea to ride and camp across Mongolia with only the provisions we can carry in our saddles, a map and a compass has already been discussed, so perhaps my far-fetched dreams may yet become reality..!