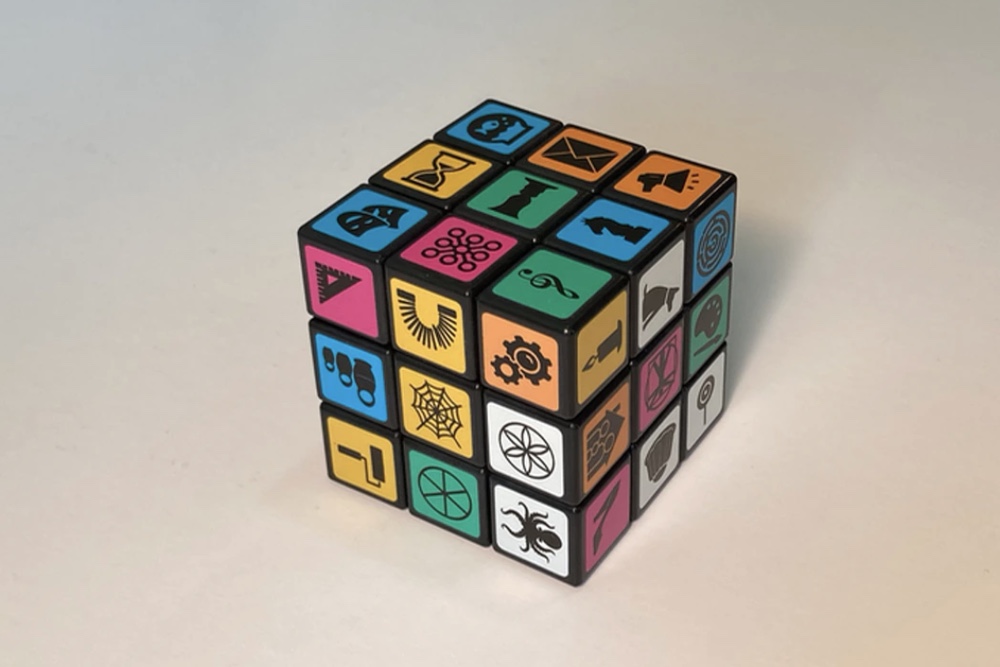 Phil Morgan is Director of Creativity: Innovation and Teacher of Human Technologies at ICHK

While most sensible people welcomed the Christmas Holiday as a chance to relax and unwind, I did the exact opposite and launched a Kickstarter campaign timed to finish just before our return to school. This was supposed to be an enjoyable process. The product is a creative thinking tool called INCUB-8, a classic 3×3 puzzle cube adorned with semiotically flexible icons. It is a playful example of the combinatorial theory of creativity in action, designed to help people who are stuck for a new idea have a ‘lightbulb moment’. The aim of the campaign was to raise a minimum of HKD$30,000 to fund the first production run.

Kickstarter appealed to me because it is the home of funky new products, as well as being a raw test of the quality of an idea and your ability to make it happen. The funding model is a binary ‘All or Nothing’ deal. Either it funds and happens or it tanks and never sees the light of day. Will it be deemed good enough to fund, or it will fail? Some perverse part of me wanted to see if my concept was good enough to find a market. I also wanted to see the maker’s side of the crowdfunding process to gain a better understanding of the potential pitfalls for the next project. There is no easy way to gain this knowledge except by doing it for real, and accepting the financial and emotional risks that it entails, because failure is a very real option. Sixty-three percent of Kickstarters fail to fund.

In class students hear me talk, at length, about the importance of making mistakes, in the parlance of Silicon Valley, we should deliberately “Failing fast and failing forwards”. The wisdom is that, even if a failure stings at the time, we should suck it up, grow a thicker skin, seize the opportunity to learn, and do something better next time. That said, I can’t honestly say that making mistakes feels great. It doesn’t. At some level it seems to run counter to the deeply-seated expectations that others have of us, and that we, in turn, have been taught to have of ourselves. Making friends with failure is not an easy or comfortable thing to do.

So, after two years of development, countless hours negotiating with suppliers, learning what makes a good kickstarter campaign, prototyping and play-testing, copy-writing, learning how to make a promo-video, honing the small skills necessary to put together a campaign, I thought I was as ready as I could ever be to hit the ‘Launch’ button.

…And that was my first mistake.

At first there was a tremendous wave of support. Kickstarter provides detailed data analytics and it looked like I’d fund the campaign easily in the first two to three days, after which anything else would be a bonus.

This was not the case. It was a masterpiece of fantastical thinking on my part.

Immediately after the first spike of interest there was a precipitous crash, as the campaign sank out of sight on the page. The window of opportunity to be ‘seen’ on Kickstarter’s front page, is extremely narrow and tens of thousands of campaigns are out there at any given time, vying for the customers’ (fairly limited) attention.

There followed the dread realisation that the early backers were all existing advocates of the product. The next two weeks were spent hunched over my laptop using all my social media channels to get the product in front of audiences who I thought would understand it. At this point I had to entertain the very real possibility that it might not work.

Sensing blood in the water and perhaps my rising panic, the sharks of ‘Third-party marketing services’ began to circle, inundating my project inbox with Faustian offers to increase my reach to millions in exchange for percentage. Scammers tried to romance details of my current backer list, and indolent money-lenders offered exorbitant terms on fake bids.

My mistake was investing so much time, thought and energy into the product, and having so much faith in the idea, that I didn’t spare the time, or even really see the necessity of building a base of supporters/potential backers beyond my regular networks. This meant I had to scramble to do this post-launch, which was frankly exhausting. I used to like the aphorism ‘Jump and the net will appear’, but that seems, if not naive, at least excessively optimistic, after having had to knit together my own net while hurtling towards a hard landing. Lesson learnt.

Eventually, and by virtue of ruthless social-media self-promotion (Which I really don’t feel comfortable doing), the campaign caught the attention of some interesting individuals and groups and I began to understand what my target demographic actually looked like. Teachers involved in ‘Gifted and Talented Education’ liked it, as did some heavyweight creativity researchers. It struck a chord with facilitators, trainers and coaches. A few sideways-thinking people decided that they’d actively promote it themselves and with days to spare it reached the funding goal, though it was more a cause for relief than celebration.

The campaign was always intended as a ‘calling-card’ for the product, and in that it has been successful. It has led to connections with other companies and organisations who are interested in INCUB-8s potential as an educational tool and I am hoping that the end of the campaign is really just the beginning of other adventures in the niche market of ‘ThinkerToys’.

To be genuinely creative it is necessary to envisage something that is both new and valuable, but a good idea on its own is not good enough. The difference between a good creative thinker and a successful entrepreneur is the ability to understand all the actions that need to take place to execute on an idea.

Without action and an appetite for risk, good ideas remain just ideas.

Phil’s campaign can be found here.