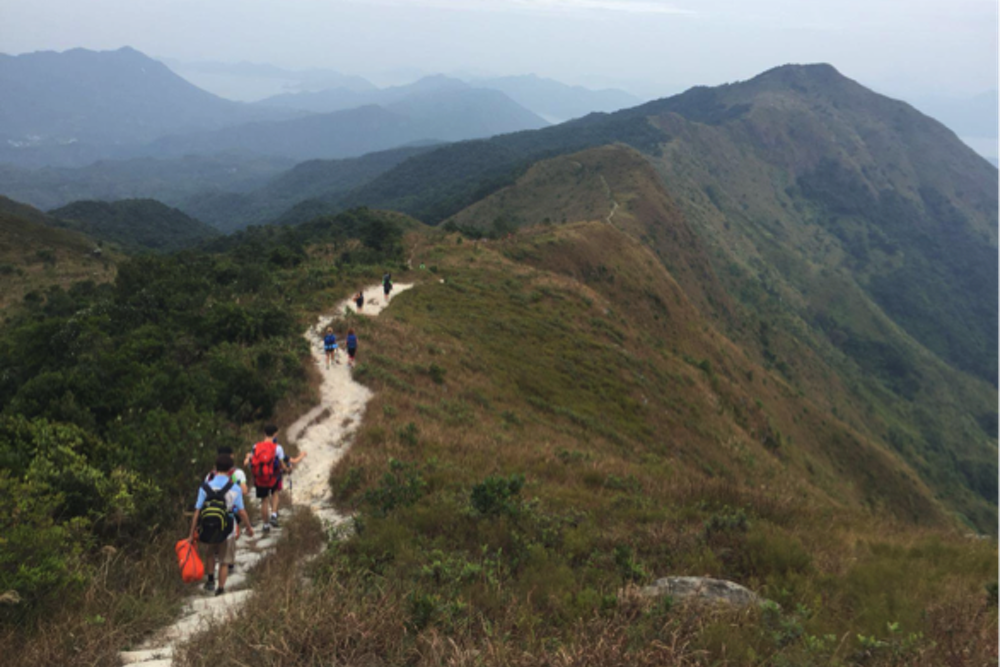 Ray Chan and Chris Holland are the ICHK teachers who led the challenge.

The 2017 CAS Week Adventure Challenge lived up to its name and then some this year. Undoubtedly, the week has been extremely tough which led Aoi to remark one evening that the week should not be named the Adventure Challenge but a Survival Challenge! It involved 85km of hiking with a full pack and 3,000m of cumulative climb character building. The Adventure Crew, thirsty for “blood” (this is how Mr. Chan refers to the markers along the way, prompting weary yet determined “BLOOD” choruses whenever another was reached) kicked off with Hong Kong’s greatest single-day hiking challenges: The Pat Sin Leng, which translates to “The Ridge Walk of 8 Immortals,” referring to the series of peaks our intrepid mountain climbers would summit along the ridge.

Staff members were highly impressed with the patience and support students demonstrated toward each other throughout this highly challenging “warm-up.” In challenges like this, everyone reaches a point where they could use some words of encouragement and moral support, and this intrepid crew was there for one another throughout. Unfortunately, toward the end of the day Charlie suffered a rather serious ankle sprain. Luckily, the Adventure Crew came together to help her complete the journey. The steep ascents beckoned many of our crew to rethink every item they held in their packs for the main event: The Lantau Trail.

The next morning, we met bright and early at Central Ferry Pier with more utilitarian packs than we lugged through the Pat Sin Leng the day before and took our ferry to Mui Wo where we would start our four-day, 70km stretch.

The first day proved particularly challenging. Summiting both Lantau peak and Sunset peak with heavy packs is not for the faint of heart. What started as a slightly overcast day turned into quite a cold, rainy, windy mess once we had the first summit in our sights.

The weather continued to test us during our steep, precarious descent in the dark. Our headlamps zigzagged down the mountain as we made our way down, running on fumes. It was the longest 1km stretch ever walked. Once again, Team Adventure rose to the challenge, supporting one another throughout what was for everyone a major challenge. Finally, we reached our campsite, wet and weary, at 7pm and pitched our tents. Once everyone had set up camp, sterilized fresh water, and cooked dinner, there was no gas left in the tank and everyone was soon asleep. As students quickly learned, their responsibility didn’t end with a finished trail, but they rose to that challenge as well. The next morning, the group arose, packed up camp, and threw on their packs in a flash, ready for Day Two. And so we headed off in the shadow of Big Buddha.

Luckily, this was an easier day, but not quite easy enough for Wesley’s shoes, which exploded in protest. He and Mr. Chan popped into Tai O for some glue, and off they went. And everyone was still feeling the torment of the first day. Knees shook like those of cartoon characters as the students bent down to fill pots with water. Having arrived earlier this time, there was time (and energy) for a campfire and s’mores.

Day three was another big challenge: 30km until the next suitable campsite. It started off innocuous enough, with a nice morning walk along the coast, and then through an organic farm. As the weariness set it, temptation grew to call it a day at each passing campsite. We were impressed that students came to a decision amongst themselves to press on to avoid leaving too much trekking for the last day.

Fortunately, we had interesting characters in our ranks and there was lots of learning going on throughout the week. Inspired by the site of the road bridge to Macau being constructed, we had discussions about globalization and development, considering its advantages and disadvantages. It was good to see a real-life context for the students of Environmental Management as we talked about how to preserve the environment, the plight of the pink dolphins and the restricted freedom of indigenous villagers to use their own land. Students reflected upon Artificial Intelligence and the impact it might have on the future, had conversations about the nature of knowledge and truth and we even sneaked in a lesson on the philosophy of Descartes whilst talking about “The Matrix.

Fortunately, we had interesting characters in our ranks. Thanks to Campbell’s expertise, we were even able to learn about the differences between green snakes, bamboo snakes, different types of constrictors and pythons, and which snakes were venomous or legal to own as pets. It’s a good demonstration that learning can take place anywhere and everywhere and it helps to be curious, ask questions, talk, and listen.

Aside from being a practical tool as a vehicle for learning, a trek has tremendous value as a metaphor for some important ideas. After the snake talk, we pressed on and enjoyed the scenery along the way.

I would think by now most of our students and parents are familiar with the idea that education does not simply happen within the classroom. Of course, you will understand that you have been learning how to map read, navigate using a compass and campcraft. We were impressed with your efficiency in setting and packing up camp, the preparation of your own meals and the skill you all demonstrated in guiding us through the trail. You most likely already understand that you have been developing your sense of independence, teamwork, leadership and levels of grit and determination. We saw some of you digging deep into your reserves of energy and spirit, perhaps deeper than you yourselves had realised was even possible. These are what some people might call non-cognitive skills and what others may refer to as building character.

It’s not the destination but it is the journey that is meaningful. The actual end point at Mui Wo did not really matter, the point is that through our journey we found moments of awe and inspiration, struggled to overcome the terrain and had experienced a sense of achievement and gratitude by the end of the journey. In the same way, you will often hear us say that it’s not the grades that are important but what you learn through the process of trying to achieve good grades. Through the application of your own effort, you can reach your potential no matter what your grades.

What at first may appear an insurmountable ordeal can be overcome with a steady approach taking small manageable chunks of it at a time. Initially, it may have seemed impossible to make it over 85 kilometres and climb over 3000 metres uphill over the week. However, step by step, one kilometre at a time you were able to do it. Remember the temptation to stay at the beach campsite on the penultimate day? We were tired, but as a group you decided to push on so that you would not be left with a huge distance to cover on the final day. Similarly, you will be faced with essays, exam revision schedules and the IB diploma. It will appear daunting at first, and there will be times when you will find it hard and want to stop. But with a steady, consistent approach over several weeks, months and years you will be able to overcome massive challenges.

Thank you all for your participation, encouragement and support of one another. As a staff, we also enjoyed your company and seeing you develop as people during this week. We hope to see you on the next challenge.